The star of the „Baby” series is one to turn any place into the grounds for adventure. In our ”Shameless” issue, Alice Pagani takes us along on a ride to her world of high fashion and cheeky charm: Read the full English version of our new cover story below.

Sometimes the greatest adventures can be found hiding under the table. In the corner they await, behind the armchair or under the shade of a lamp. What is this, you ask? Alice Pagani declared Rome’s ”Hotel Parco dei Principi” her adventure land. During our fashion shoot – taking place only hours before Italy’s nationwide lockdown in March – the actress explored the premises with the curiosity of an explorer. In a time when we are challenged to find entertainment within our own four walls, Alice certainly provided some on-set inspiration…

Let’s start at the beginning: The realms of Alice Pagani’s superstar fame are not limited to her home country of Italy. The actress, who has 1.7 million followers on Instagram, has been playing a leading role in the Netflix teen series „Baby“ since 2018. The story of two high school students seeking to pimp their everyday life and pocket money through prostitution is thrilling. Alice plays young Ludovica Storti who is on the look-out for an adventure herself– or rather, as it turns out, for love and affection. After a classmate secretly filmed Ludovica having sex and posted the clip online, she is branded a slut at her elite school in Rome’s noble district of Parioli. To escape the everyday humiliation, Ludovica seeks refuge at night and in bars. She flirts with older men and plays with the power of her young body. What started as play soon becomes all the more serious: Ludovica gets involved with guys who offer up women for sex.

Without giving away too much just now, the most important conclusion to draw from the story is that Alice Pagani’s role is a tough one. Ludo is funny, adorable, charming, but also badass. If she were a boy, one would probably describe her by using old-fashioned terms such as „rogue“, but as usual, the dictionary offers no female counterpart to those traits. To put it simply: Ludo loves to play with fire, which is why we couldn’t imagine any better character for the cover of our „Shameless“ issue. But how much of Ludovica can be found in Alice Pagani, we ask? „Ludo firmly believes that there is a place in life where she can feel safe and be herself. She struggles to find that place – be it in the heart of a person or when looking down from the hill over the big city. I think I moved to Rome five years ago for the same reasons. I felt a very strong feeling inside me that made my legs run without any interruptions,“ says the 22-year-old.

Music is her oxygen: Alice on sharing Ludo’s love for dancing

After growing up in Ascoli Piceno, it was the big vibrant city of Rome that captivated Alice: „It’s a city full of art, full of people with beautiful energy,“ the actress says. And it’s a place to party. During our shoot, Alice proceeded to jump on beds, danced in the elevator, or lounged under the table, which made us sure about her having one more thing in common with Ludo: her passion for dancing. „I love to dance with no choreography in mind, just to the rhythm of the music. I do it at home every day.“ Music is Alice’s greatest source of inspiration, anyway: „It makes me go to all the places of my mind, gives my thoughts a rhythm. I can visualize my ideas when I listen to music and formulate the sentences that I later write in my diaries. Music is my oxygen.“

„Baby“, by the way, is currently the fifth the most-watched Netflix series in Italy (bear in mind how many series the streaming provider has to offer). Season three just finished shooting and a preceding public casting call already hinted for it to be even more spectacular than the twelve previous episodes. Casting agents called for „people with special skills such as fire-eaters and clowns who are able to create certain shapes with balloons, acrobats with special skills on stilts and street performers in general.“ Wow. Of course, Alice was not allowed to tell us what exactly will be going down on in the new episodes. What she did tell us, however, was that the show will see its end after season three. And while the actress understandably is left sad, she only associates moments of happiness with shooting „Baby“: ”It gave me the opportunity to grow artistically by playing a character without filters. I remember filming many scenes in which a woman’s weaknesses were revealed. It was very touching.“

Even though the story of Ludo has come to an end, we can be sure that Alice is just getting started – for just as she explored Rome, she now has embarked on an unstoppable career path. For „The Poison Rose“, she shared the screen with John Travolta and Morgan Freeman. Plus, she is the face of Emporio Armani – which in Italy almost counts as an equivalent to knighthood. At the side of British superstar Nicholas Hoult („X Men“, „The Favorite“, „Tolkien“) she is the seductive female lead in the fragrance campaign „Together Stronger“. „Being a member of the Armani family makes me proud of the work I have accomplished to date.  I have learned many things since becoming a part of it. Giorgio Armani’s perception of beauty, the care for detail, and his sensitivity to art have made me understand how much commitment is behind a great spirit,“ she enthused. On set for our fashion shoot, Alice moved about quite naturally. High fashion, lavish gowns, and precious individual pieces became her second skin. Fashion, she said during the fitting, was a way for her to express how she felt. When she was little, Alice had even dreamed of becoming a fashion designer herself. She realized early on how significant Italy’s position is to the fashion cosmos, leading to many glittering dreams in her childhood bedroom.

Today everything glitters around her, but the actress now dreams of other things: „I dream of a role that changes physically. I feel the need to experience my body and mind in new ways. I would like to interpret something difficult, something that will challenge my abilities. I love difficult things, they make me feel alive,“ says Alice. And there it is again, the Ludo fire, the adventurous vibe. Whenever Alice forms such sentences in our interview, you feel her unbridled power and remain with the feeling that Alice and Ludo melt into one person in their essence. But then she hits back with quite the load of self-reflection: „In the past and with some of my decisions I was superficial. The thought of having the world in my hands is not always useful. Sometimes you have to make mistakes to understand how important it is to be humble.“

On greyhounds, chocolate balls and Jodie Foster: Alice in private

And after Alice had stripped off all the gowns and the big names, we finally saw her, too: the regular 22-year-old, the one who raves about cuddling with her family’s greyhounds and streams series on the sofa, the one who stays home. By the way, Alice’s favourite series is „Black Mirror“: „I’ve watched all seasons for the umpteenth time. Episode 2, ‚Arkangel‘ directed by Jodie Foster, is my favourite episode ever. You gotta watch this one.“ She also revealed her guilty pleasure for Netflix & chill: „Nesquik’s chocolate balls. I am addicted to these damn things! If I turn on the TV and sit on the couch with the balls, some cereal and soy milk, it’s all over.“ In the end, once we felt that we understood Alice Pagani in her core, we asked how her friends would describe her. A few phone calls later, she summed up: „Impulsive, scatterbrained, sweet, truthful, a workaholic.“ Alice has many facets and – how could it be any different – in this lies her unbreakable charm. Some days she’s a little more Ludo, after all. 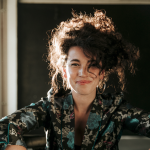 Another Day, No Other Bae: Dieser Schuh vereint Footwear-Trends Previous Post
„Will you be my quarantine?” 5 Date-Typen und Ideen für eure virtuellen Video-Dates Next Post

The access_token provided is invalid.