by Robin Micha
0 Comments
in Culture

Billie Eilish Fans, Willow Smith Stans & Fans of Lisa and Lena: Be in our issue #8!

There’s no one who gets celebrities and artists better than their own fanbase. That’s why in our next issue, we won’t have to explain to you why Billie Eilish, Willow Smith and Lisa & Lena are the voices of a generation – you’re so much better at that. Fill out the form in this article and be part of our upcoming print issue #8!

There are Lady Gaga’s Little Monsters, Beyoncé’s Beyhive and countless other fandoms in the world, but we won’t have to name them here. What’s much more important is the feeling that unites ‚em all: A fandom is a family. There’s no one who gets today’s musicians, actors, influencers and celebrities better than those who follow them on a daily basis. And let’s be honest: There’s nothing more annoying than a stuck-up journalist telling your celeb’s story from the outside. That’s why for our next print issue, we’re counting on you to shed „true” light on your superstars. And maybe it’s your time to shine, too?

Think you’re the one to know what’s behind the phenomenon that is Billie Eilish? You’re the one to rise to go to war once people throw shade at Willow Smith? You were among the first to discover Lisa & Lena?

Fill out the questions below and be part of a multiple-page-spread feature
for our upcoming print issue (release 30 August 2018).
If your statements are selected for the story, we’ll notify you ASAP.
Your data will not be made accessible for third parties. You can read more about our privacy policy here. 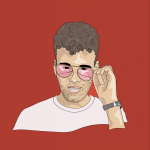